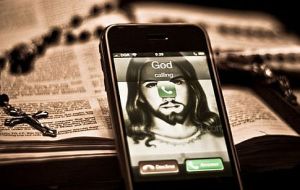 PART ONE in a series of posts detailing the events that transpired in the last 90 days that have lead me to seminary. – What I present to you is my witness to the power of our Lord and how he can perform miracles in the least of us.

It all started in a Captain D’s restaurant… on the side of the highway… deep in Tennessee.

We were on our way home from a week’s long vacation to Orlando, Jennifer was driving, and I was half asleep in the far back seat.  All day I had been struggling and talking to God about a pain that was on my heart.  I was asking God why he hadn’t taken that pain from me.  I was asking him what purpose he had in store for me for that pain.  God doesn’t ever give us more than we can endure, but I felt I was at the end of my endurance.  I think at that point I finally gave it all over to Him.  It was about this time that we stopped for dinner at a Captain D’s.

Here we are standing in line, waiting to place our order.  My wife, my girls, and my mother all in front of me.  Suddenly a man behind me asks, “do you like civil war relics?”.  I turn around and there is a 50 year old man and what appears to be his 75 year old father.  I replied that I did and he proceeded to pull out a small box from his shirt pocket.  He opened the lid and revealed several civil war era bullets and other relics and asked if I’d like to purchase any.  I remarked that I didn’t and he began to put away the box.  That’s when I noticed the box itself.  The box had originally contained a small New Testament Bible.  I mentioned that I liked what the box used to contain and this sparked a deep conversation about God in which we witnessed to each other about our faith.  For what seemed like twenty minutes (but was probably only three or four) we stood in line conversing about God, lost souls, and how we had to work hard to save non-believers.  The crowd of people in line seemed to flow around us.  I was filled with an intense feeling of peace as I stood sharing how God has worked in my life with these two men, this father and son.  Our conversation broke off as we reached the front of the line, we placed our orders, and all found seats in a crowded dining room.  During our meal the son would make comments to me from across the room.  We attempted to carry on a conversation, but words were lost in the noise.  At one point the son asked me “are you related to ______?”  Something caused me to not hear the name he said, but not being from anywhere near where we were in Tennessee I said, “No”.  What are the odds he would know someone I was related to?  He persisted though and I remarked that I wasn’t from around there.  At that point he gave me a look of a father trying to explain something to a child and said “you don’t know what I’m talking about do you?”.  I said that I didn’t, we finished our meal, and left the restaurant.

I assumed my role of passenger again and crawled into the far back seat of the three row seating Buick.  I had been driving most of the day and I was exhausted.  Within a short time of driving we entered Nashville, it was now getting later into the night.  Suddenly our vehicle was coming to stop in the middle of the highway.  Jennifer had slammed on the brakes to avoid something in the road that had apparently fallen off a semi.  This brought me instantly awake and I looked up to see what was going on.  As we made our way around this giant item in the roadway we could see broken glass everywhere.  Just as I was wondering what could cause all of this glass we see a car flipped upside down, roof smashed in, resting against the giant concrete divider of the highway.  I yelled for Jennifer to pull over so we could help.  It was apparent this vehicle had just came to rest.  I jumped out of our vehicle and ran to this over turned car, all the while vehicles were screeching to a halt around us.  The passenger door was facing me and the driver’s door was against the concrete barrier.  I began pulling on the crushed door and managed to open it enough to crawl inside the vehicle with the trapped occupants.  I found a husband and wife lying upside down covered in glass and debris.  I managed to get the husband free from his seat belt, but the wife could not move.  She was face down against what would be the roof of the car facing away from me.  I went into EMT mode and began speaking to, and examining, the patient.  I searched her body for any obvious signs of injury while keeping her calm and obtaining her medical history.  I discovered that she was 42 and had a stroke two years previous that caused partial paralysis on one side of her body.  This was bad.  While she didn’t complain of any injuries, she could not feel one side of her body that could be badly injured. I could not attempt to move her or extricate her from the vehicle without immobilizing her.  It was time to wait for the professional firefighters and all their equipment to remove this woman.  By this time a State Police officer arrived and I briefed him on the developments from inside the wrecked car.  I continued to speak with the husband and wife and attempted to keep her calm as she was still upside down and unable to move.  She mentioned Jesus and I asked if I could pray with her.  I laid hands on her and her husband and we began to pray.  As I was praying it was as if God was right there in the vehicle with us.  We all felt it.  I felt like I could reach out my hand and touch Him.  I had never felt God as a physical presence in my life.  It was overwhelming.  As our prayer finished the firefighters arrived.  They pulled me from the vehicle and began to work on the woman and I returned to our car.  At the car I found my wife, my mother, my 13yo daughter and her best friend had been praying for us while I was in that flipped vehicle.  Again I was overwhelmed.

As I began to drive away from this accident scene God revealed to me what he had done.  God revealed what his plans had been.  Our Lord had sent two angels to visit me… in a Captain D’s… on the side of the highway… deep in Tennessee.

The Bible is filled with at least 17 incidents of God sending angels into the world before him.  They are sent to send a message.  They are sent to test if someone is worthy.  They are sent to do God’s work on Earth (as it is in Heaven).  On this night in Tennessee two men appeared to me in that Captain D’s.  I believe they were angels sent to discern if I was worthy.  They were sent to see if I would witness about my faith to a stranger.  I also believe they were there to delay me.  Their visit, our conversation, resulted in me, a trained Emergency Medical Technician, being at the scene of a terrible accident just as a flipped vehicle came to a stop.

God had found me, a lowly sinner, a person that had run from his call for years, worthy to do his work.  Me.  Insignificant me.  Worthy. That revelation was, and is, amazing.  That feeling, that event, healed my long held pain.  It healed me within hours of turning it all over to God.  It is yet another example of how God has the miraculous ability to make something great come from something terrible.

And the woman?  She was uninjured.

We read accounts of eye witness statements from accident scenes in which unnamed strangers appear and provide aid to victims.  Those victims go on to describe how the aid giver must have been an angel sent from God, as no one saw them appear at the accident scene, and no one saw them depart… they just vanished into thin air.  I believe God used me in this way on that night.  This woman never knew my name.  This woman never saw my face.  When this believer goes back to her friends and family she will witness to a story in which a nameless stranger appeared right when their accident happened.  This stranger prayed with them, offered aid, and then was gone…

God found me worthy to be used in his plans.  What can I possibly do to pay back such an incredible honor?

Jason and Jennifer are dedicated to spreading and sharing the love of Jesus Christ.

seeking to experience and listen to God daily

Gospel-Centered Resources For The Gospel-Driven Life

thoughts from a small town pastor

Journeys in faith and work